RUMC Chapel Outside
circa 1960

RUMC Chapel Inside
circa 1960

Feb. 6, 1777 is the date to which our church traces its  beginnings. All the way back to a circuit rider named  Francis Asbury, though Methodists had met in the area  even before 1777.

All the way back to a family named Reister who, though  they themselves were Lutherans, had a profound effect on  the community in which the little church flourished.

All the way back to a time when the Declaration of Independence was not yet a year old, when houses were made of logs and lighted with oil lamps, to when travel was by horse, carriage or wagon, and to when the yet unnamed Reisterstown Road was but a rutted dirt trail barely passable during the winter months.

On that February day the first Methodist building, called Asbury Chapel, located in a log cabin on a site which is now our cemetery, was still 14 years in the future. It would be 25 years before the town had a post office. A second church would be built in 1830, somewhat closer to today's Main Street and in front of the first building.

By 1866 a split formed in the church over the issue of slavery following the Civil War. The so-called Methodist Episcopal Church - South began to worship across Main Street in the building that today houses Coldwell Banker Realty.

A third church, today's "Old Sanctuary," was built in 1868 and dedicated on New Year's Day 1870. The lives of the little church and the little town were beginning to intertwine. You may recognize the names of those who built the third church: Washington Gore, James Berryman, Phillip Owings. Their names are etched not only in the stained-glass windows of our Old Sanctuary, but on roads and landmarks throughout our community.

Our current sanctuary was dedicated on May 5, 1974 with a cornerstone to be opened by tomorrow's congregation of RUMC members in the year 2073.

But the history of our church is more than just long-ago dates and deeds. Our history's importance is as the living, breathing embodiment of the people in the pews, as palpable as the names in our prayers. History is the culmination of the work and worship of each of us.

Helen Geist, a member interested in RUMC history, wrote her own version of the history of RUMC in 1985. Visit our Historical Records page to read Helen's version of RUMC's history.

Why Do We Read Scripture? 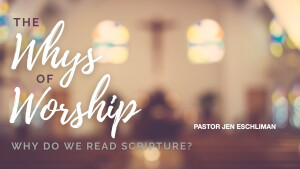 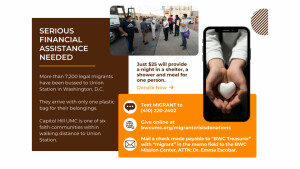